Merging old and new to create a state-of-the-art community space. 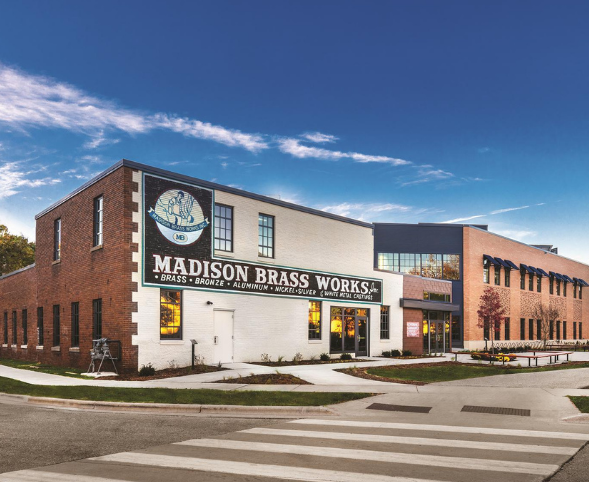 Madison Brass Works: Pouring their hearts into their work

For more than 100 years, men working in the Madison Brass Works building used the same tools and technology to fabricate metals for the military and industry throughout the region.

Henry Vogts was a German immigrant who came to the United States when he was 14.

In 1895, he moved to Madison where he met Edward Schwenn, his brother-in-law Frank Schwenn’s brother. The two learned the foundry trade in Beloit and Milwaukee before Henry decided to head “out west” to “see the world.” He was in San Francisco when the earthquake of April 1906 hit, making Henry’s next move clear, “I was so scared by the earthquake, I decided the best place for me was Madison.”

The next year he started the Madison Brass Works in partnership with Edward Schwenn.

Arlene Landsness lived next door to the Brass Works and remembered Henry. “Old Henry Vogts was a very interesting person, a born storyteller. He was a grateful citizen of the United States, brilliant, and extremely hard working. He and wife Barbara lived across from Lowell School on Maple Avenue,” she said.

At age 87, Henry Vogt (center) was still directly active in the work at Madison Brass Works.

Henry Vogt’s partnership with Ed Schwenn ended when Schwenn passed away during the influenza pandemic of 1918. Henry Vogts, continued the business as the sole proprietor for years.

For a short time after his death, Schwenn’s wife Alma became the administrative manager. According to her granddaughter, Kathryn Seifert, Alma was soon forced to sell her interest in the business because the German foreman refused to work for a woman. Ed’s son Elmer eventually became general manager and worked at the brass works 1980.

Henry reorganized Madison Brass Works as a partnership in 1936 with his son, Harry F. Vogts. Between 1929 and 1941 the workforce grew from eight to 40 employees. In June 1942, the company incorporated with the two men and their wives serving as the board of directors — Henry and Barbara, and Harry and Betty.

Henry Vogts’ new partner and son, Harry F. Vogts (1909 -1994), graduated from the University of Wisconsin-Madison. Harry succeeded his father as president of Brass Works after Henry died, in 1968. Harry owned the firm for 26 years.

Henry Vogt with the first "Sifting and Winnowing" plaque Madison Brass Works created for the entrance of Bascom Hall at UW-Madison. Over the years, they created one for every UW System campus in the state.

A place in history

Madison Brass Works was placed on the National Register of Historic Places in 2016, after Goodman purchased the building.

It was not the architecture that made it historically significant. It was what happened inside. Madison Brass Works made brass, bronze and aluminum castings and fittings, using a sand-casting process. It was a primary supplier to companies in Madison, Milwaukee, Racine and Chicago until it closed in 1994.

Most of the work comprised of the smelting and molding of metals, using about 1 ton of brass a day. The blast furnace could attain a heat of 2400 F.

While some of the fine sand used to make the molds came from the United States, much was imported from France.

In 1911, one of the most significant castings was produced, the bronze “Sifting and Winnowing” plaque that is mounted at the entrance of Bascom Hall on the University of Wisconsin campus. The 4' x 4′, 225 lb. plaque proclaims, “The great state university of Wisconsin should ever encourage that continual and fearless sifting and winnowing by which alone the truth can be found.” Forty five years later, it was stolen and everyone was pleasantly surprised to discover Madison Brass Works still had the original wooden form, making it easy for them to make the replacement. Today, you can find the plaque on every University of Wisconsin campus — all created at Madison Brass Works.

In 1942, Madison Brass Works secured contracts with the federal government to fabricate castings for torpedo components. It fulfilled military contracts until at least 1944.

Madison Brass Works was the only brass foundry in Madison until 1946, when Bernsten Foundry was established on the east side of Madison. Bernsten is still in operation. 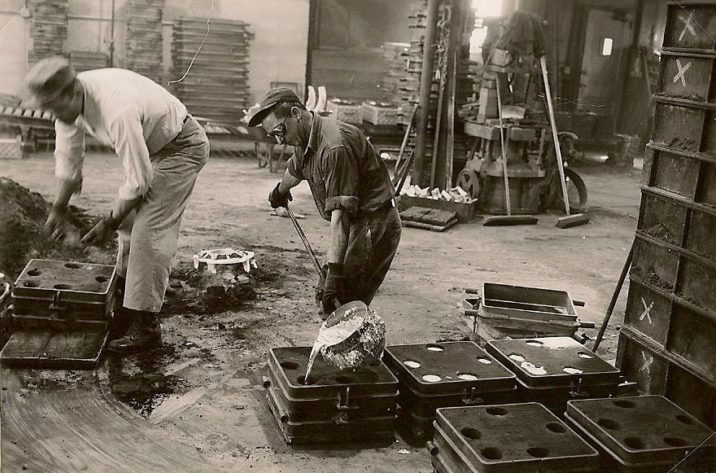 Madison Brass Works was primarily a "jobbing foundry — making parts for other companies — but about 10 percent of its work was one-time projects like the cross for Bethany United Methodist Church on the west side of Madison, which the men are working on here.

Vogts and Schwenn purchased the property at 214 Waubesa Street from the East Side Land Company for $400. It was conveniently located adjacent to railroad tracks in the village of Fair Oaks, which was annexed into the city of Madison in 1913.

In 1907, the first Madison Brass Works plant opened as a small, wooden shed measuring only 18' x 24'. When it was destroyed by a fire in 1912, Vogts and Schwenn, erected a larger fire-resistant brick and steel building. By 1917, the business had outgrown that building, and construction on a new even larger foundry was started and completed in 1918.

In 1929, Vogts had another addition constructed as the company kept growing. A 1934 appraisal of the property indicated that the foundry had an earthen floor and was unheated, except for a stove in the office. There have been six additions to the 1912 building, as business continued to grow.

In 1994, an employee of Madison Brass Works, Thomas Pankratz, purchased the property, renaming the business Celestial Stone Foundry and Forge, which produced custom metal castings and recycled metals. Pankratz owned the building for 21 years before selling it to the Goodman Community Center, which had quickly outgrown its home in the historic Kupfer Iron Works building across the street.

The Center preserved the historic appearance of the oldest interior and exterior section of Madison Brass Works, and added new construction where the architectural integrity of the buildings made restoration impossible.