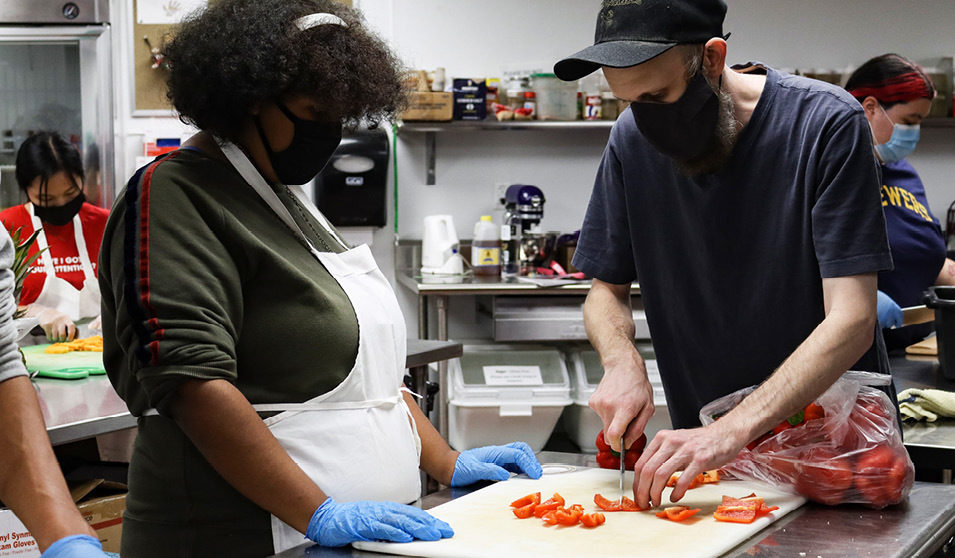 What happens when every student feels valued, knows they belong and has opportunities to grow?

Goodman staff put their heart and soul into helping kids, but there are always forces that tempt young people to make bad decisions, too. In September, one of our staff told me about one doozy of a bad idea: TikTok’s “devious licks” challenge. It encourages kids to steal or damage school property and then anonymously share a video of it on TikTok.

I just shake my head every time I think of it. Students (not ours) have stolen soap dispensers and fire extinguishers, ripped up lockers and damaged toilets. Recently, every roll of toilet paper was stolen from the restrooms at East High School.

It’s crazy. But what does it have to do with Goodman? Some of our high school students had a conversation about “devious licks” recently that revealed something I love to hear.

Her friend Miguel wasn’t. Why would anyone steal something from Goodman when they give us so much?” he said.

As you read, consider what our community would be like if every kid felt like they were being given “so much” love, encouragement and support. If they all got what kids at Goodman are getting. If all of us treated everyone with consideration.

I have to say, in the eight months I’ve been at Goodman, I’ve been surprised and impressed — again and again — by what I see happening in every one of our programs. From the little kiddos to our older adults.

But right now, I am going to zero in on our middle and high school programs. Especially TEENworks. You’ll be able to see how committed our staff are, how remarkable our young people are and the kind of impacts you could make with a gift to support Goodman.
If you like what you learn, please consider making a gift today.

The power of feeling valued

Staff have been refining our teen employment program over the years, and they’re finally seeing it come together. In a big way. Carrie Breunig has seen the program evolve, and she lights up when she talks about how great the teens are doing. “TEENworks is drawing so many high school students, we have a wait list.

With help wanted signs all over town, they could get a job at lots of other places. But the word is out — being in TEENworks at Goodman gives them so much more than a paycheck: they develop a sense of purpose, build skills, get help with homework and goal setting, and are supported by staff who have been trained in Social and Emotional Learning,” she said. “As students work side by side with our staff, and experience all the ways Goodman invests in them, they begin to trust in their own value. They know they can come here for community, support, a meal or access to other resources like our food pantry.”

This fall, students in TEENworks have been talking with staff about how they are feeling SO behind after COVID. Especially in math. They’re really worried they’ll never catch up.

As soon as staff realized how many kids are feeling that stressed, they added a Tuesday night tutoring to the schedule. That sent the message, “We hear you. And you matter.”

Carrie was quick to add, “It’s not a paid TEENworks shift, but I know they’ll show up, and they’ll be so grateful for the extra help.”

“TEENworks is drawing so many high school students, we have a wait list. With help wanted signs all over town, they could get a job at lots of other places. But the word is out — being in TEENworks gives them so much more than a paycheck.”

She’s seen how this program works. “We get to know them and they get to know us. We build trust while they work, and then we support them with good WiFi, Chromebooks, meals, adults who care and tutors. And with all the other students who are in the same boat, no one feels like they’re the only one,” Carrie said.

But don’t think our staff have a quick fix. Howard Hayes has worked with Goodman kids for 23 years. He will tell you it can take a while for kids to believe they’re valued. Samantha was one of those kids. He laughed as he reminisced about her, “Sam would push people’s buttons — staff, teachers, peers — until she got into trouble. I kept telling her, ‘You are way more than this. I think of you all the time. I’m afraid you’re going to keep this up until it hurts you. I want to support you in being with people who support who you are.’”

She heard the same message from all our staff, but she moved to

Chicago before there were any signs that it really sank in.

But then! Months later she stopped at Goodman for a visit and made a beeline to Howard. She could hardly wait to tell him, “I got it, Howard. I got all those things you were telling me. In Chicago I found my people. The ones who pull out my positive side. I’m doing great now.”

So there’s the payoff. Her future just got more secure.

The power of belonging

For years, Howard has led a boys group to help young men learn to open up emotionally. “Right now, we are doing a lot of the same things as we did before the pandemic, but we’re focusing on empathy, compassion and a willingness to support each other,” he said. “The boys really need that right now.

“In the group, they get to see and experience being supported by their peers. They’re all at different stages, but when they see one of the guys has the courage to speak up and be vulnerable, they discover they aren’t alone. They think, ‘I’m going through that, too.’”

The power of growing

Catie Tollefson works with our TEENworks kids every day. She recently told me about a two-hour shift she worked with eight of our young
people. At first, it sounded like typical teens doing normal teen stuff.

But Catie saw more. “We were making pretzel necklaces to sell at a local event — to benefit Goodman. These kids were from different high schools and neighborhoods, but you wouldn’t know it. They were chatting up a storm about all kinds of things. Everyone was speaking their voice. And, of course, they were often hilarious.

“That might seem like such a small thing, but it’s actually big. After they’ve worked together in TEENworks for awhile, they get comfy talking with all kinds of people. And appreciating people different from them. I count that as a big success.”

And the world could use more of that, right?

Jeff Schmidt, our catering chef, has cooked in lots of kitchens, but never one filled with teens. We were chatting recently, and he smiled as he told me he was a teen who got into a lot of trouble. He often challenged adults. So he admitted when he first started, he was a little worried he’d have to work with teens like him.

Instead, Jeff said, “These kids blow my mind how often they walk through the door, and they are much more genuine and respectful than I ever imagined they’d be. I know there are kids who have big challenges at home or outside of here, but somehow, they consistently leave that at the door.

“Kids come in at age 14 or 15 totally lacking confidence. And as they develop skills, and learn how to work as a team in the kitchen, their confidence shoots up.

“Even if they aren’t destined to work in the culinary arts, there is a standard of work they will carry over to any field: initiative, a positive attitude about work (most of them don’t walk in with that), staying on task, being responsible. It doesn’t take long before they realize this is a pretty cool opportunity in a pretty supportive environment. And they choose to grow.”

So there you have it. In the kitchen, our young people feel valued. They belong to a crew that creates professional-quality catering for events, and like Jeff said, they grow.

I talked with Howard again the other day. He made an important distinction. He said, “I work AT Goodman. I work FOR these young folks.” I love that.

Then he shared a story that may tell us why he still loves working for middle school kids — after all these years at Goodman.

He shared, “Not too long ago, at the beginning of group, one of the young men noticed I wasn’t myself. He asked me, ‘Are you okay, Howard?’ And I told him, ‘No. It hasn’t been a good day, Jamal.’ Right away he asked, ‘Is there anything I can do?’ And I smiled to myself and told him, ‘No. But you asking me changes everything.’”
Indeed it does.

“I work AT Goodman. I work FOR these young folks.”

Lot of things are working

Even with COVID limitations, staff said it was the best summer ever.

“There were zero times when there was a major behavioral thing,” Catie said. “Sure, there were normal behavior corrections like, ‘Hey, did you think through how someone would feel when you said that?’ or ‘Can you find a different word to express that?’”

But clearly, the teens wanted to be here. Sixty of the 61 students (our highest summer enrollment ever) participated ALL summer. They could have stayed home to play video games, watch TV — or do nothing. But no. Every day they made the effort to come to Goodman. And we’re so glad they did.

Goodman staff do give our young people “so much” but the kids give it right back. And just think — before long, they’ll be adults working, raising families and giving “so much” to their community.

What do you think?

Can you imagine if everyone in our community was “given so much” like these students? Wouldn’t you love to live in that community?!

Goodman is one of many organizations pouring itself into making our community better — for everyone. If you are able, please support Goodman or another organization making positive changes in our little corner of the world. There is so much more we can do. Together.
Goodman runs on love — and support from people like you.

Click the donate button above to make a gift today.

Note: Some of the names of students have been changed to honor requests for privacy. 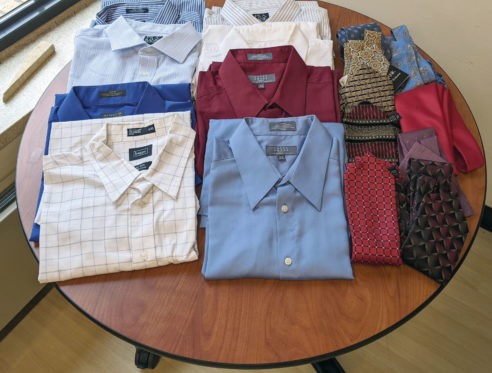 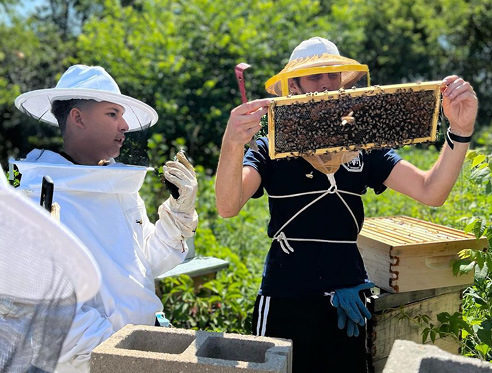 Summer Letters from the LOFT 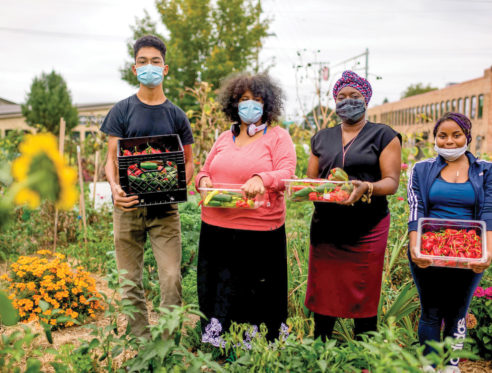