Love and the Goodman Center

How one chance encounter led to a lifetime of love. 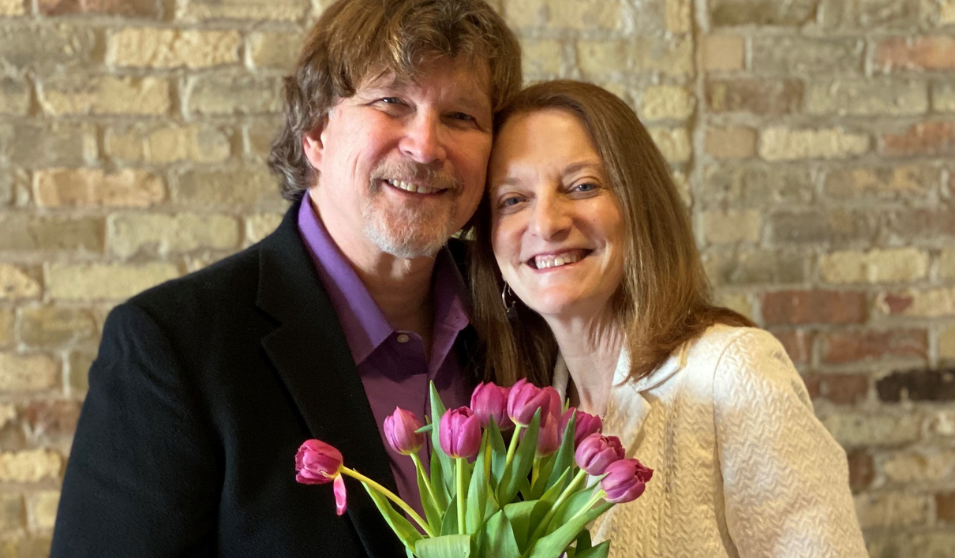 Juli Aulik and Troye Shanks met at the Goodman Center, and then got married here exactly three years later. On April 23, they will celebrate their 10th wedding anniversary.

The Goodman Community Center (GCC) invited us to share our story. The GCC holds a special place in our hearts as we celebrate on April 23 the 13th anniversary of the day we met and our 10th wedding anniversary. We both met and married in the Merrill Lynch room in the Ironworks building.

On April 23, 2009, we each attended a 1000 Friends of Wisconsin event honoring founding board members Emily Early and Bud Jordahl. Juli was on the 1000 Friends board with them. Troye attended with his mother, as his dad, Roger Shanks, was on the board as well. Roger died in 2004.

That sets the stage, now we will each tell our parts: 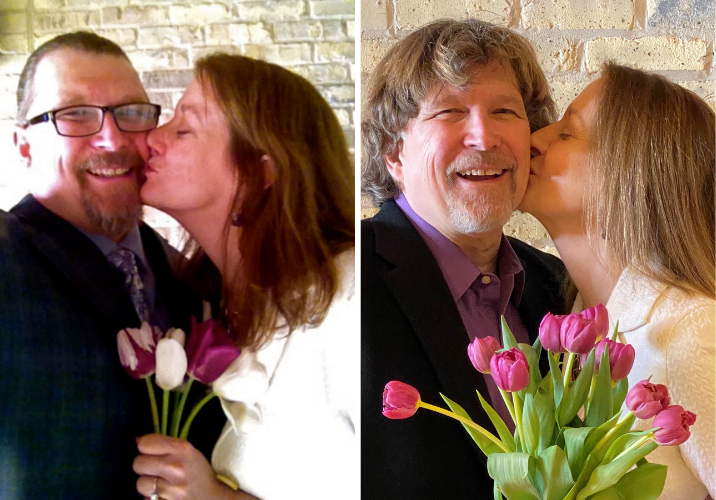 Then and now. Juli and Troye recreated a favorite photo from their wedding day when they visited the Goodman Center this year.

Troye: I arrived with my mother and settled her in at a table with some people she knew. I was standing behind her watching the program. At the time, my mother was seriously ill, and I was caring for her and her farm, living with her and my teenage son. I had plenty on my plate and I really was not looking for anything more.

Juli: I arrived a bit late and chatted with people I knew on my way in. I slid into the back of the room, standing for the program. Governor Doyle was making his remarks. I admit my attention drifted around the room, and I noticed that (1) I didn’t know the person next to me which is rather unusual, (2) he was taller than me, (3) he had his hair, and (4) he was not wearing a wedding ring. Am I shallow? Perhaps. Was I looking? No. Happily single living with my cat. 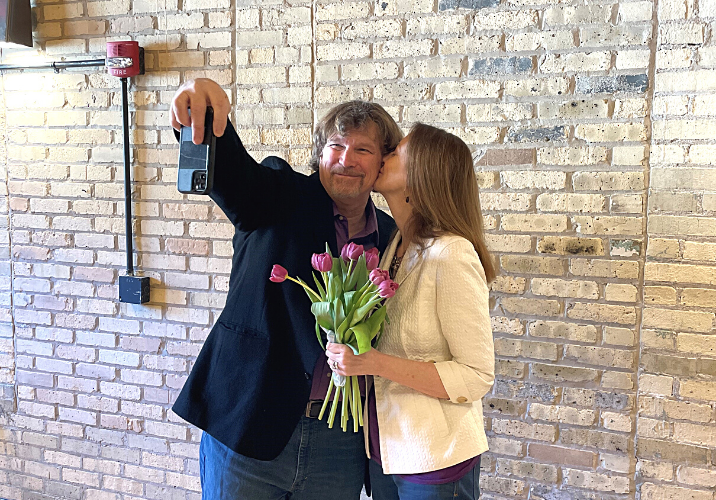 Juli continued: The program ended, and I promptly introduced myself to the man next to me. I was excited to learn he was Roger’s son, as I adored Roger and missed him greatly. I introduced Troye to several people who knew his dad. We exchanged cards, and I went on my way. Later, as I was making my way to talk with Bud and Emily, I looked around the room and saw Troye chatting with State Senator Fred Risser. I thought, “I love a man who can work a room.”

Troye: The next morning, I woke up and wondered whether or not I should email Juli. Was it too early? Should I even go there? I went to my computer and there I found a short message from her asking if I’d like to get together.

The two people who were “not looking” got to know each other and a couple of years later decided to get married. We were planning a small summer wedding for 2009 but were talking at lunch one afternoon in March and it became clear we both wanted to get married on the anniversary of the day we met in the place we met. That was only a few weeks away.

Juli: I quickly called Becky Steinhoff, the former director of the GCC, to see if the space was available at the same day and time as we met. It was! I then called Dan Koval, my friend and judge, who was available to marry us! Becky agreed to be a witness. How to choose another witness from all our friends and family? I asked Bud Jordahl’s son Jordy who was there the night we met and who knew Troye’s dad. He agreed!

We arrived on our wedding day to find that Becky had written “elopement” on the whiteboard of the day’s activities. How fun!

Dan married us in front of Becky and Jordy. Becky took some photos with our phones. She brought champagne. We toasted and they all signed GCC tee-shirts as our mementos along with two coffee cups. There were tears and laughter and much happiness. 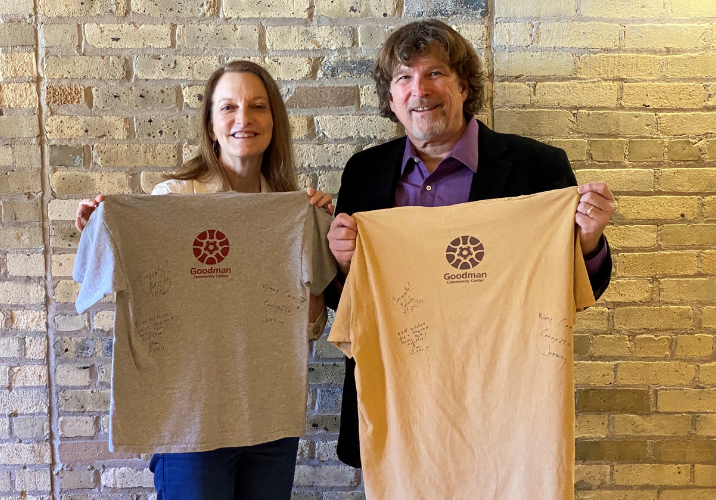 Juli and Troye still have the Goodman t-shirts from the day of their wedding.

Ten years later, COVID made us hold off on making anniversary plans and by the time we inquired, the space was booked on our anniversary. But that doesn’t matter because it’s in our hearts! Goodman Center Director of Communications Amie Hoag was kind to offer that we come and take some “10 years after” photos a bit before our anniversary, and it was very fun and meaningful to do so.

We would like to thank the Goodman Community Center for not only being such a warm and centering place in our community but also its staff, past and present, for making such special times and memories for us.

For more information about hosting your event at Goodman contact: 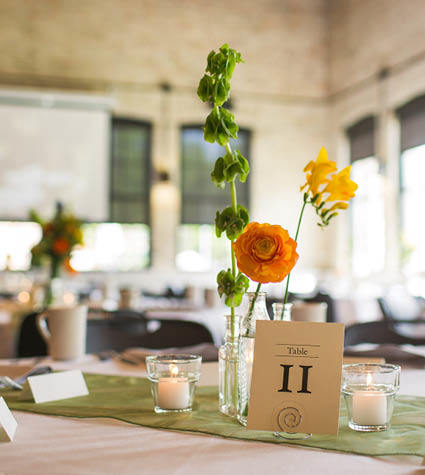 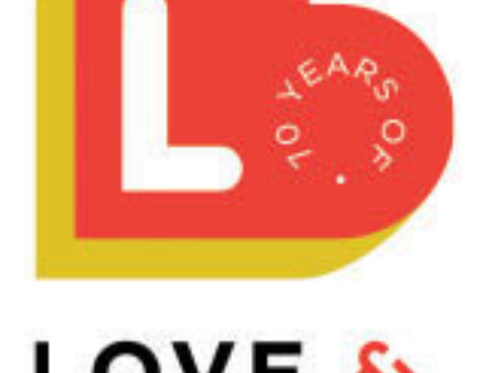 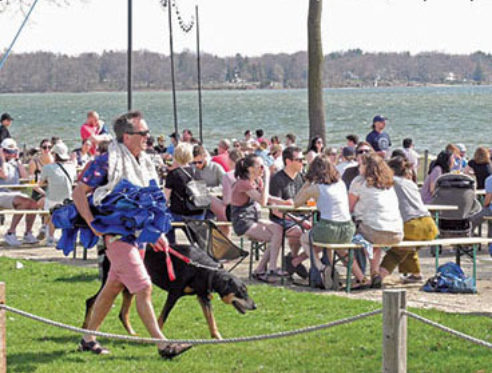 Unwind outdoors on Madison's east side

Gathering spots across the east side come alive as the weather warms up. Here's a few top spots to check out.

Creator Sarah Stankey plans to have seasonal diorama displays for children and passersby to view. The first exhibit is about pollinators.